Graduation in Sebokeng in Gauteng, for Sokhanya Students 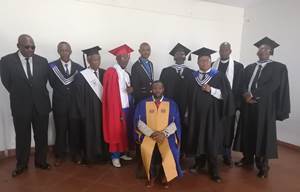 The Sokhanya graduation held in Gauteng in the Vaal Triangle at Sebokeng, was hosted by Archbishop Makhetha together with his team. There were thirteen students from Sebokeng, as well as one learner who joined the graduation ceremony from the Eastern Cape. Jerry Sesoko represented NBI at this well-planned event where all learners were honoured and […]

Held at the Christ Church in Strand on 9 November 2019, in collaboration with Pastor Gringoe Mashalaba from the Emmaus Bible School (EBS), NBI hosted an information session and graduation which comprised of 14 students from EBS as well as 2 students from NBI. It was an honour to have the Director of Serving in […]